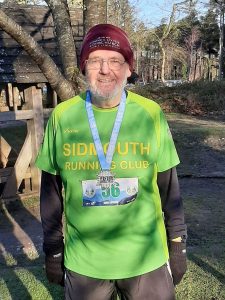 David Skinner braved the chilly temperatures up in the Haldon Forest on Sunday morning to take part in the first part of a Winter Series.
Having taken part in several events previously on Haldon Hill and really enjoying them, David could not resist entering the Haldon Forest Winter Series 2020. Organised by Purple Geko Events, this race was the first of a 3 race series with the 10k and 10 mile yet to come.
As competitors arrived the organisers were concerned about ice along the route. However, the course was checked and the temperature rose by 2 degrees, so with the sun shining those fears evaporated. The start featured a steep technical descent which does include some running in the woods and going down steps, this caused a bottleneck. After the steps the undulations began, it felt however that mostly there were long climbs and the final section to the finish really was a long difficult climb. David came 50th out of 78 runners in 42m45s.