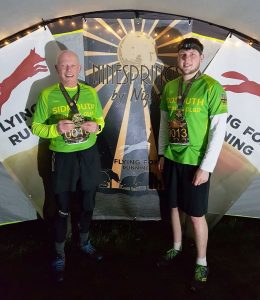 On Saturday 18th of January, on a very cold evening, Terry Bewes and Kyle Baker took part in another Flying Fox’s night event, The Ninesprings By Night.
Terry and Kyle headed off to Yeovil for a 17:30pm start for another one of Flying Fox’s fantastic night events! This one took place on the outskirts of Yeovil, at the Ninesprings nature park, named after the 9 natural springs which flow from the valley. Having competed in similar Flying Fox events on previously occasions, they were both still unsure of the extent of the challenge ahead with the freezing weather… which shoes to wear, how many layers, hat and gloves?
The 10k race was two laps of the course and Kyle took off at a fast pace, soon finding it more more challenging than he’d thought, with the slippery stone steps, mud, ponds, more steps and wooden bridges. He felt like it was a never ending up hill battle, however, the 5k lap was soon completed with a lovely down hill blast to the start of the second lap. Now knowing what was ahead of him, Kyle slowed down to a more steady pace, ready for the steps and mud, which even though he’d been over it once, it still came as a surprise! He carried on, catching up with a few competitors who’d over taken him on the first lap. Setting the pace for the rest of the run with two other runners and just one mile to go, Kyle pushed on, over taking a few more competitors. He sprinted  past the last one in the final 100m stretch, finishing in 50m13s in 30th position. Terry arrived back in 1h12m15s to find that Kyle had eaten the last of the banana cake! However, both Mighty Greens thoroughly enjoyed the race and were very happy with the medal, which was another Flying Fox masterpiece. Both lads are looking forward to the next Flying Fox Running event, Escape from Wych Woods on the 15th February.
https://www.flyingfoxrunning.co.uk/races/