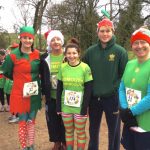 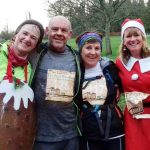 The Mighty Green Fancy Dress Machine was out in force again on the 21st and 22nd of December with 12 members taking on various trail routes including the Extremely Jolly run, half marathon and full marathon events, all of which were in the grounds of the Escot estate writes Hamish Spence.
The 10k event took place on the Saturday and had six MG’s suitably kitted out in Christmas attire. The ground had been absolutely saturated with the recent rainfall, but the sky was a clear blue giving a jolly atmosphere and a promise of a fun run in the mud around the park. The start line resembled a scene of a magical Christmas wonderland with almost all of the runners wearing some form of fancy dress.
The first couple of miles were not bad and gave everyone a chance to warm up and prepare. There were a few hills but nothing a self-respecting MG couldn’t handle. Then the fun began! A loop up into the woods with some knee deep puddles and thick oozy mud! Déjà-vu of the Bicton Blister! Then six miles in and there was an optional water slide, not really an option if your belong to SRC and anyway it was a good opportunity to remove some of the mud acquired from the woodlands. Lastly, there was a short mile or so down hill to the finish line.
The extremely jolly Kyle Baker, turned into the extremely muddy Elf during this event! He set off at a fast pace, taking on the mud, woodlands and hill by himself. On arrival at the water slide he deliberated on the best approach on tackling the soggy descent. His decision to sit as he slid, turned out not so good and when arriving at the bottom, he rolled into the mud anyway! How graceful…not! Never mind, he picked himself up and carried on to the finish line to be the first MG and came in the 13th over all position in at an impressive 1h05m. Not far behind was Allan Kay taking 1h15m25s to finish followed by Emma Vine in 1h19m40s and Derek Blackburn in 1h22m42s. The best dressed Elf in the park, Laura Broughton trod carefully through the mud to arrive back in a clean 1h28m14s. Nikita Kay and Alexis Kay set off and ran the whole route together finishing in 1h41m10s. At the finish all the competitors received the Santa, with a full beard medal and a welcomed bottle of beer bringing a seasonal smile back to everyone’s faces. 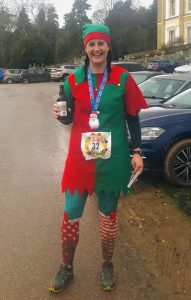