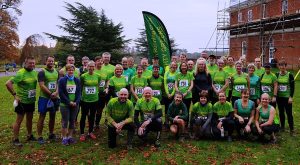 The Muddiest Bicton Blister Ever (in memory of Dave Eveleigh)

A fantastic turnout on Sunday the 24th of November with 43 SRC members taking part in the muddiest Bicton Blister ever writes Hamish Spence.

Despite the rain deluge that the West Country has received over the last weeks if not months, it held off for the duration of this event. Before the race began, organisers Exmouth Harriers read out the pre-race instructions. This included take care not to trip on the tree roots or the oversized rounded flints and to follow the coloured tape around which ever course was relevant, be it the Blister or the Lite. Then came a statement on the state of these routes set by the diligent and encouraging Marshalls. It read that there were no hills, no puddles, and absolutely no mud to wade through this year. The statement continued that the Pebble-bed Heathland of Woodbury Common an AONB was fairly dry and easy going underfoot…..They lied! This years Bicton Blister and Blister Lite was in honour of Dave Eveleigh, a member of the Exmouth Harriers and out of respect to him the race was started one minute early. All 539 runners from both races started together.

In the 10 mile Blister Anthony Hall made a very speedy get away and led the Mighty Green team all the way around with an average pace of 7:06min/miles. He took 19th place in 1h11m06s. Richard Hayes followed suit with Anthony and made very good time coming in 40th place in 1h16m44s. Colin L’Anson had a real blast and was very happy to get back in 1h29m25s coming in 123rd. However, Colin wondered where everyone had got too! He’d seen everyone at the photo before the start, but that was the last he saw!-No mighty green near him at the start, no Mighty Green passed him (normal) and he passed none (not normal). He spotted one MG in the form of Sam Ingram who vanish onto the 5K course. Colin, I’m told (obviously I can’t confirm this) it’s lonely at or near the front, ask Anthony he will understand. John Keast blazed a trail heading out quickly and maintained a steady pace to take 127th place in 1h29m54s.

Kyle Baker, Hamish Spence (Me), Allen Kay and Adrian Horne started this event together. As we started to warm up, our pace quickened and all four of us began to overtake other competitors. This continued all the way to the first proper down-hill section which headed into the narrower, steep and slippery track through the woodland. This is where I made a break for it with Kyle following suit. The track was very muddy with some deep puddles to navigate. At one point I went nearly waist deep, but still I managed to pass others. Kyle got stuck behind those that had chosen to take the sludge route so had to fight the thick, sticky mud to keep his shoes on. Both Kyle and myself were catching up with Stuart Coles and Catherine Hilton. Kyle overtook me two miles before the watering point and then passed Catherine and that was the last I saw of him. Finally, after three more miles I finally overtook Catherine Hilton. Meanwhile, both Allan Kay and Adrian Horne continued to run together for most of the race, helping each other along and controlling their pace. Kyle Baker came in 156th in 11h33m11s just before Stuart Coles 1in157th, with Hamish Spence (me) taking 178th in 1h37m30s and Catherine Hilton 179th in 1h37m39s. Allan Kay 1h42m28s in 212th place.

Then came Sarah Clapham 214th in 1h42m32s, Deb Marriott 217th in1h42m39s with Don Cawthera crossing the line in 218th in 1h42m49s. Karen and Christine Farnham made a steady get away from the start line, keeping to a modest pace all the way around. They navigated the mud with care enjoying the perfect air temperature and zero wind resistance. This time Karen allowed her sister Christine to lead the way and held onto her shirt tails. Both of them showed the spectators how a Mighty Green finishes a race with a burst of speed specially saved for the last one hundred yards. Christine came 225th in 1h43m32 and Karen 226th in 1h43m34s. Both ladies had just passed Adrian Horne who said at the finish that he “felt a real sense of achievement having waded through the mud”. He arrived back in 229th, 1h43m40s. Next over the line was Graham Sheppard 257th in 1h47m35s with Sarah Ginsberg 270th in 1h50m32s. Emma Vine completing it in 1h50m46s closely followed by Michael Ginsberg 276th in1h5103s.

Milly Frankpitt, and Terry Bewes ran with Helen Palmer and Lesley Hook for the first few miles along with Sarah Watkins and Paul Williamson. They warmed up steadily giving each other lots of encouragement. On entering the first woodlands Terry had the words of George Chalstrey ringing in his ears, “if this was a race Terry you would be up through the middle”. This meant when it comes to water or mud you try to find a way around it rather than through it. So, with Milly following, all six of them went right down the middle, sometimes in mud halfway up to their knees, but all passed many runners this way. Milly and Terry slowly but surely left the other four behind and took it in turns to be the pace setter. They made a great team and managed to increase their lead on the other four by nearly fourteen minutes. Milly took 325th and Terry 326th in 2h01m27s. Then came Sarah 366th in 2h14m40s, Lesley367th, Helen368th and Paul 369th in 2h14m41s, the last of the MG Blisterers to cross the finish line and they did it together, all holding hands and very happy to be finished.

Taking part in the 5 mile Bicton Lite were ten MG’s with Kate Marriott leading the way and taking 1st SRC runner in 41m21s and 7th over all. Hot on her heels was Sam Ingram 10th in 42m34s and Sue Collman 46m29s in 25th place. Becky McDonald came 31st in 47m35s and Derek Blackburn arrived back in 49m35s taking 32nd place. Kerry Salter 58th, 53m23s and then crossing the line was Jodie Hawkins in 54m16s, 62nd over all. For some reason best and solely known to herself,  Emma Grainger had cleaned her running shoes prior to the race, she also chose to put on white socks!? It’s fair to say that said socks will never be white again. No, they really won’t, not ever. She also discovered that plunging straight into the (in places) knee deep mud, was curiously satisfying compared to the teetering around on the slippery edges. Her time was 57m33s finishing 75th. Next was Julia Haddrell coming in just before the hour marker in 59m30s taking 85th. Our one and only Parkrun Alphabet collector David Skinner, took 117th place. There were 142 runners competing in the Lite.

Both events were great to take part in and were very well organised. All runners from SRC conveyed their thanks and as always after finishing, members of the SRC headed to the finish line to cheer on the rest or the club as they in turn arrived back. This illustrates what a great club it is and what a friendly and supportive bunch of people we have.