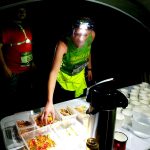 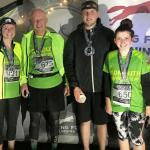 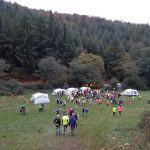 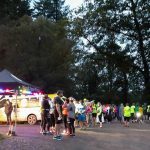 The long and winding road played on the car radio as we left Sidmouth on a dreary and wet Saturday afternoon heading some 40 miles toward Watchet to run the Dark Woods night race. And it was, long and winding. Beccy had the written directions and Nikita used the satnav on her phone which worked well until the other side of Taunton where the signal was very intermittent and then was lost altogether. The Great Wood is the Quantock Forest; a mix of broad leafed woods and conifer plantations that cover several hills and valleys. This was a race that none of us had done before and talking to some who had at the recent Nightjar race it was a tough one with two big hills. The event is organised by Flying Fox Running and such is the popularity of their races that 342 competitors turned up on a cold wet night to run the various distances. On entering the wood, it is about a mile up a stony road to the car park and race HQ and heading up you noticed arrow markers and we soon realised that we would be running down here later. Arriving in plenty of time we parked near the start so were able to sit in the car, watch the rain and wait with some anticipation as to what we had let ourselves in for. We could hear the race briefing and watch the first batch of 6km, and 8.5-mile runners set off before venturing out in the rain to take on the 6 miles.
The race is set in a figure of 8 and from the start Beccy and Kyle set off together whilst I ran with Nikita for a short while before she was gone. The first loop of about 2 miles, after the drop from the start, is a gradual climb back past the start and then the mile run down the drive where the marshal tells you as you turn left “Beware of the slope”. The slope was the first hill, a mile uphill climb with an elevation gain of 500 feet to the water station but it was runnable with fairy steps in places. After refuelling there was a quieter section before the second hill which was shorter but had a much steeper incline and that was not runnable, the mud making it barely walkable. We were now on top of the ridge in the clouds, which made for some very interesting running with the headtorches through the mud and stones but at least it was fairly flat before a short nasty steep downhill run over loose stones to enter the final mile downhill sprint to the finish. Nikita has only recently joined the club after completing the couch to 5km programme and this was her first 6 mile run in the dark over a course she did not know so great respect to her. She would have beaten me but with 2 miles to go I had caught up with her and as she lost a shoe in the mud, I stopped to pull it out but left her to put it back on whilst I ran on. At the finish we received our amazing medals and tucked into the the food and drink laid out for us. It was well worth the drive, an excellent race superbly organised by Nathan and Pippa of Flying Fox Running and their team. Next up will be their Ninesprings by Night.
Kyle Baker 23rd in 59:27, Beccy McDonald 8th female and 33rd in 1:05:54, Terry Bewes 1:14:53 2nd in age group, Nikita Kay 1:16:48.