The Exmouth Bradley 10k
Prior to the storm on the Saturday night 634 competitors had entered themselves into The Exmouth Bradley 10k race. However, 137 cried off, leaving 497 to brave out the bluster and rain, 7 of which were weather-proof Mighty Greens. By the morning the weather had cleared a bit, with only a moderate breeze and light drizzle which passed by the start of the race. So the Magnificent 7 ran it in either a Mighty Green tee-shirt or vest.
This is a two lap race starting on the Exmouth Promenade which heads out along the sea front and onto part of the beach passing the RLNI all the way to the zig-zag steps. Then back to the Lifeboat station and up to Maer Rd and onto Douglas Avenue and back down to the seafront where the competitors turn and do one more lap.
The first MG across the finish line and in 191st place was Becky McDonald with a new PB of 54m:08s. Suzi Rocky is continuing to improve on her performance with a very steady run crossing the line in 58m:05s and taking 248th position. Having recently joined SRC, Jasmine Reeves ran her first race in the Mighty Green colours. She did herself and SRC proud. She came 266th and ran the route in a very respectable 58h:33m. Amelia Frankpitt used this race as her final warm up before the Exeter Half Marathon in two weeks’ time. She come in at 1h00m51s taking 298th place. Just after Amelia was Rachel Burrow, who ran a steady pace all the way around and got an impressive time of 1h01m38s in315th place.
Having participated in some off road trail races in September, this was the first road race Terry Bewes had entered. The Exmouth Bradley 10k was to test out how his recovery was going. All was going to plan for Terry. As he began the 2nd lap, he could see the lead runner entering the last hundred yards to the finish line. Undeterred he powered on along the sea front again, overtaking a few runners. Then, halfway around and going up the hill for the last time, he caught up with a lady and got talking to her. She too was recovering from an operation, so they decided to run the final mile together giving encouragement to each other. This really paid off, as they both passed many runners and stormed their way to the finish line. Terry had set his sights on an 11 minute-mile pace, so he was very pleased to find he had in-fact been achieving a better than 10min/mile. This defiantly shows that it pays to have a running buddy. Terry gained the 313th place in 01h01m35s. His next race will be the Minster Challenge which will test him further over a longer distance.
It was a busy few days for David Skinner ,who also took part in the Parkrun on Saturday. So, with the stormy conditions during this 10k event in Exmouth and the fact that he is still not fully recovered from a recent illness, it was never going to be easy for him. However, he still managed a time of 1h10m05s, just 6 minutes slower than last year. David was pleased with his performance having covered15k over the weekend and feels that he’s gradually getting back to his normal form. 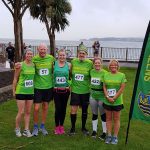 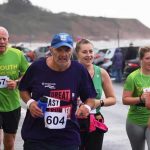 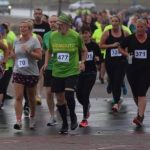 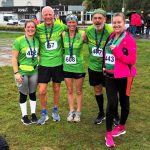 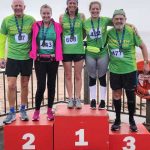