City To Sea Again For Jo
Jo Earlam took part in the City To Sea Marathon on the 7th of September for the second year in succession. This is a very challenging event which starts from the Exeter Riverside and follows the coast path to Babbacombe Downs in Torquay. This event lulls the runner into a very false sense of ease with around twenty miles of relatively flat running along the River Exe, the canal and down the Exe Estuary passing Starcross and Dawlish Warren. It is only after you leave Shaldon and re-join the South West Coastal Path, that the real challenge actually begins. 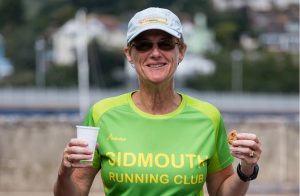 Jo was keeping up a steady 12 min/mile pace until halfway, then slowed to a jog/walk pace for the next six miles. After Shaldon, for the hilly section which she knew was coming up, her pace dropped to a mostly walk pace. Even though she had slowed dramatically for the last six miles, Jo was still passing other competitors. This was Jo’s first run of more than six miles since spraining her ankle back in July. More importantly this was her 71st Marathon to date.