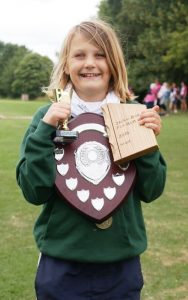 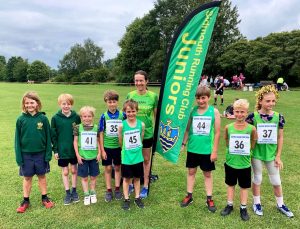 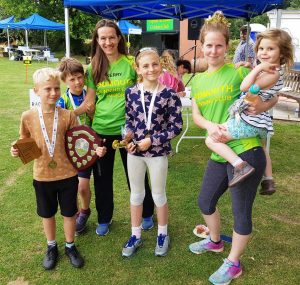 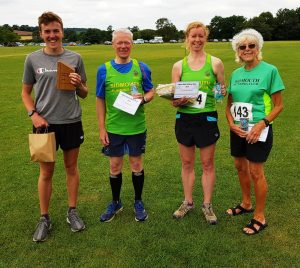 The Otter River and Rail 10k race was organised by Tipton St John Playing Field Association in conjunction with Sidmouth Running Club and was sponsored by Otter Brewery, Harrison-Lavers and Potbury’s and Michelmores Solicitors.

This year the Sidmouth Running Club as a whole supported the Charlie Gwillim fund raiser and ran as Charlie’s Angels. Charlie at 27 years of age was diagnosed with an incurable brain tumour and she is being looked after by her fiancé Rob, who is her full time carer. The SRC was working closely with her business Devon Embroidery, prior to her illness on some new ideas for club kit and she had spent a lot of time on its development.

Fifteen minutes before the start, a very lively warm-up session taken by Honiton Running Club’s Paula Ferris was enjoyed by the competitors. With many traditional warm up techniques put into a dance-like routine and all to music. This added to the jovial atmosphere of the day.

With warm, but cloudy weather and bone-dry conditions underfoot, this scenic off-road multi terrain10km race got underway at 11:00hrs sharp. Forty one SRC members took off from the village playing field of Tipton St John. The competitors ran around the edge of the cricket field, through the carpark and on down-stream along the River Otter to the village of Harpford. A well earned water stop with energy giving Jelly Babies awaited them on arrival. They then enter into Harpford Woods proceeding along a footpath until the old railway line. Here, the route takes a turn to the left and up a flight of steep steps back to Tipton along the old rail route. At Tipton village centre they turn right into a narrow footpath and through fields with a shot spell on the road to Fluxton. At Fluxton they head up hill and back to Tipton along the road. When back at the village it was a short run along the river and into the village playing field to be cheered enthusiastically over the finish line by Terry Bewes.

Taking part or helping out in the Tipton Jackie Box Fun Run on Saturday were 8 juniors all of which were proudly wearing the Mighty Green writes Kerry Boyle.

Three had participated in the recent FUNdementals in athletics course who were Elsie Wiltshire, Seth Lancaster and Dominic Hall, the 5 others all have parents or siblings who are Sidmouth running club members. The more experienced of the group started off steadily, knowing that it was a mile and not to sprint off too fast across the playing fields at Tipton. The next part along the river was harder to negotiate through the cow field and rabbit holes, but despite a few trips and ankle twists they picked themselves up and all completed the run back along the old train track to the Tipton playing fields. All of the children received a medal and a large sugary snake for their fantastic efforts! Elsie Wiltshire a local from Tipton received a haul of medals winning first girl in her age group (under 10’s) and first local girl. Fraser Felton-Smith also wearing the mighty green was first Tipton boy and also finished first in his age group (under 12’s). Oscar Burston was 2nd in the under 10’s followed by Seth Lancaster who was 5th in the same age group. Also completing the race for Sidmouth was Georgia Felton-Smith, Jake Burston and William Hall. Congratulations to all, you did yourselves and Sidmouth running club proud!