On Sunday the 26th of May, 19 Ladies from SRC took part in the last ever Women Can Marathon to be held locally in East Devon. This years version included a Full distance Marathon, a Half Marathon as well as a 10k race. This is a fantastic event that promotes, inspires and encourages Women’s running all over the world. The inspiration for this women only event came from American endurance runner Kathrine Switzer, who in 1967 was the first woman to officially complete the all-male Boston Marathon. Her competitor number was 261 and she completed in 4 hours 20 minutes. She completed this marathon despite being manhandled by officials who attempted to drag her off the course just two miles in! Kathrine’s campaign for the “archaic rules” to be overhauled helped to change endurance running for women forever. What Kathrine did showed that women can run marathons, that they’re not “too fragile”.

The Full Marathon started out from the town’s rugby club and down onto the Sidmouth seafront and headed along the Promenade and on up through The Byes to Sidford. Here the runners cross the road and head up onto Harcombe hill and down to Sidbury. After Sidbury there is a long climb up onto East hill which looks over into the beautiful Otter Valley. A long descent through windy tracks through Wiggerton and towards Ottery St Mary. At Ottery St Mary the runners turn down stream along the River Otter to Tipton St John playing fields. Here the full challenge joins the Half Marathon route which continues down stream to Newton Poppleford along the banks of the River Otter and further on to the bridge over the Mouth of the River Otter (South Farm Road). This is where the 10k race got underway. All three races proceeded along the Jurassic Coastal Path to Sidmouth with all runners finishing in the Sidmouth Rugby Club grounds. All three events set off simultaneously at 9am this year with cooler air earlier and dry conditions underfoot but warming quickly through the day.
The Full Challenge:
Kirsteen Welch took off at the start of the Full Marathon leading the way along the promenade with cheering and encouragement from spectators, in-fact Kirsteen led for the whole route and finished over thirty minutes before the next runner crossed the line. Kirsteen was ‘hitting the wall’ at around mile 20, but managed to keep herself going. She rolled into the towns rugby club ground in a speedy 3h40m18s to claim 1st place over all and first the SRC member over the line. The next MG to finish was Jess Trim in 23rd place in 5h09m09s.Then came Els Laures, Jane Hemsworth and Naomi Garrick. This was Els first marathon and it was thanks to Jo Earlam and Jane Hemsworth who encouraged her to give it a go. With the assurance that this race would be a great experience as a first marathon. Els discovered that it definitely was the best and is so grateful for both Ladies’ support. In contrast this was Jane’s 24th Marathon. Jane and Els took on the challenge together and treated it as a day out, chatting their way around. They also enjoyed the friendly atmosphere with Naomi along with the stunning East Devon scenery and eating the occasional sugary snack. All three Ladies took 6h21m16s to complete the event, ( Els 58th, Jane 59th and Naomi 60th). Previous years organiser, Jo Earlam took on the role of sweeper for the whole event this year, chalking up her 70th marathon. Sophie Trim made it to around the mile sixteen and had to retire from the event. As a team in the Full Challenge, SRC came in 3rd over all.
The Half Challenge:
When Kerry Boyle found out that this was going to be the last ever year that the Women’s Can marathon was going to take part right on her doorstep, she knew she had to be involved. So, despite not getting enough training done, she feIt she could manage a half marathon. At the start of the Half Challenge, Kerry was full of nervous energy and decided to make a quick getaway. She ran fast along the first flat seven miles, all the way to the Coastal path. She knew she would struggle with the undulation of the hills to Ladram Bay and by 10am the weather would be getting hot. After a brief stop-off for sustenance at one of the many friendly and well organised water stations, she battled on up the hill from the Ladram Bay campsite, with the knowledge, that after that there was only one more big climb, Peak hill. She felt so much joy when running down the other side being greeted and cheered on by other Mighty Greens who were marshalling. Then it was onwards to the rugby club and more importantly, the finish line! Kerry Boyle came 7th and first MG in a time of 2h01m12s. Kerry felt that this event was brilliantly organised and thanks all those involved for hosting such a great event in her home town.
Ronnie Masters was the next Mighty Green taking 9th place in a time of 2h05m10s. Sarah Clapham, Sue Collman and Sarah Ginsberg kept each other going with Sue finding the heat of the morning tough going. The trio came in with Sarah Clapham 14th in 02h16m18s, Sue taking 15th in 02h17m30s and Sarah Ginsberg 16th over all in 2h18m16s. Jemma Wiltshire came 28th in 2h29m56s just before Ruth Ray who came 30th in 2h29m57s with Helen Palmer in 2h42m04s. A huge well done for persevering to Kate Jenkins who came in on 4h34m. As a team in the Half Challenge, SRC took 1st place over all.
The 10k Challenge:
Paula Farrand took the 1st SRC place and 15th over all in the 10k Challenge, doing it in just 1h28m53s. Not very far behind Paula were Sarah Burston, Amelia Frankpitt and Lesley Hook, who had teamed up to complete the event doing it in 1h32m23s. The 10k team shot along the coastal path and as a team, SRC took 1st place. 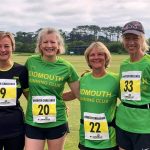 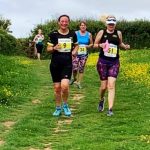 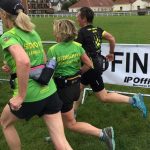 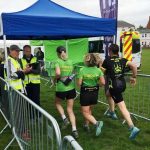 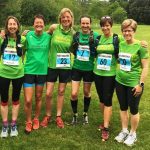 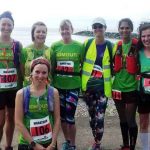 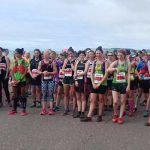 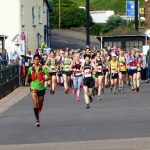 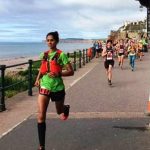 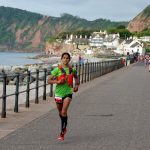 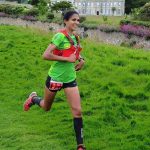 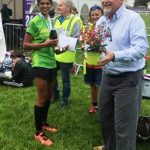 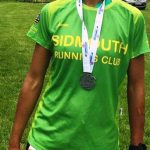 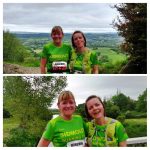 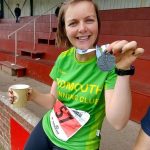