The LMEvents Clinic Exmouth Half Marathon and 10k are multi-terrain races both of which start and finish on the Exmouth seafront The running conditions were dry underfoot with a cool light wind. The race started at 10amon the Exmouth seafront and headed out towards the RNLI station onto Orcombe Point and back along Queens drive to Maer Lane for the first hill climb. The runners continued up Maer Lane onto and along Douglas Avenue until Littleham. At this point the Half Marathon runners continue on to Knowle and the 10k split off along Littleham Rd and head back down Maer Lane to the finish line on the Seafront. Meanwhile the Half Marathoners winged their way over to Kersbrook and Budliegh where they turned back along the coastal path for the trail part of the race back to Exmouth.
With dry conditions under foot on the trail sections, Antony Hall was pleased he chose his road shoes to run in. Getting stuck into this race early on paid off and he had an average pace of 6.57 minute miles. Having held a good position from the start, he knew it was going to be tough as he turned back to join the coastal path. With the hills he knew he had to dig deep, with the cold headwind he had to dig deeper. His efforts paid off as he secured a position of 7th overall, second in age group and 1st MG over the line with a time of 1h31m41s. Also taking part and not far behind were Shaun Bagwell in 1h45m36s and Paul Kay in 2h03m29s. There were 202 half marathon finishers.
Taking part in the 10k was Terry Bewes, Rocker Shepperd, Laura Broughton and Becky McDonald. Rocker hit the go fast button, romping around the route and taking the first SRC runner position in 53m06s, freeing him up to encourage the other MG’s over the line. Laura saved her best for last getting faster as she got passed the halfway point. She reached a good 8.41minute mile down Maer Lane and kept up her effort for a sprint along the seafront to cross the finish line in 58m20s. With photo finish evidence of a better than chip time, Becky was robbed! The clock showed 59m54s, but the chip time had her at 1h00m21s. She seemed to have upset the tech equipment on the day, with her Strava tracker letting her down as-well! However, she comes away with one consolation by achieving a PB. Hot on her heals with one second between them was King of the MG’s, Terry. Terry also achieved a first in age group with a cracking time of 1h00m22s. There were 98 finishers in the 10k race. 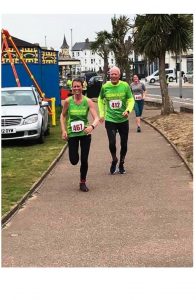 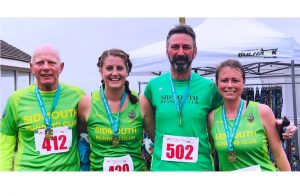 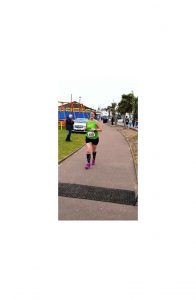 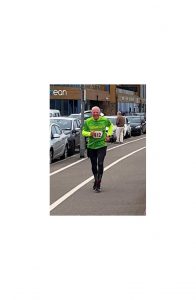 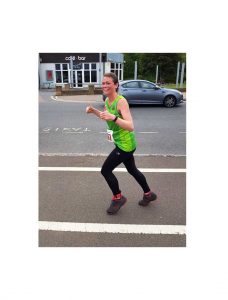 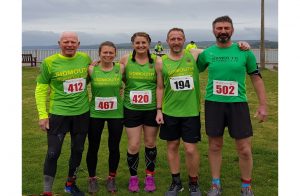 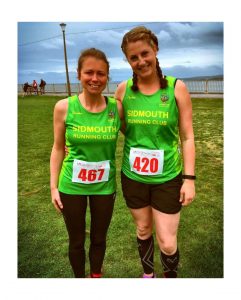