The 15th edition of The Reindeer Run took place on Saturday 1st of December 2018. This annual festive event raises funds for Otterton C of E School. There are two events, a fun run of 3k and a race of 10k, both start and finish in the village of Otterton. They are multi-terrain, rural courses, that use lanes, paths, tracks and farmland in and around the lower Otter Valley. Being held on the 1st of December, entrants are encouraged to come dressed in festive attire.

This year, due to the last week’s rainfall, the level of the River Otter is very high. This meant that the route under the road bridge was chest high in water, so for safety reasons the route had to be changed. Just after the start, the 10K was re-routed towards Ladram Bay and the Coastal Path back to the sewage works. Then through the lane to meet up with the old route across the muddy fields, up some slippery hills before the road, back to the white Bridge and up the River to the finish line. 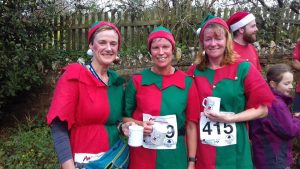 Next in in order of appearance were three helpers of Santa, Jane Hemsworth being the fastest helper in 91st place with a speedy 1h:04m:08s, Helen Palmer not so far behind in 112th with a nippy 1h:10m:43s and Jo Earlam arrived in a steady time of 1h:10m:58s, 113th.
Jodie Hawkins endured the hills, got to grips with the mud and slipped over the line in 1h:14m:03s. Debbie Marriot (Mrs Claus) 144th, Monica Read 145th and Don Cawthera (Mr Claus) 146th, all crossed the line together in good festive spirits with a seasonal time of 1h:17m:24s. Julia hadrell 167th in 1h:24m:26s with Helen Neighbour 169th in 1h:26m:21s and Sue Cunningham 170th place in 1h:26m:23s As there was not an official last runner on the day, Terry Bewes very kindly offered to sweep up at the back, shepherding the tail enders and giving words of encouragement all the way back to the finish. He claimed the 182nd spot and got around in 1h:45m:57s. Due to a cold Emma Grainger DNS. 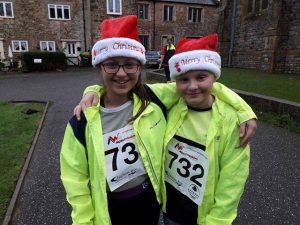 In the 3K Fun Run Tom Clapham was the 1st Sidmouth runner over the line coming 25th in 18m:15s. Zak Raynor in 25m:19s, closely followed by two young ladies showing great teamwork, Rose Ashby in 28m:26s and Kara Salter in 28m:27s. Then arriving in 30m:57s was Meena Agar followed by Sarah Watkins and Paul Williamson who both arrived in 33m exactly. There were 133finishers.