A Cool Day For The Dartmoor Vale Marathon 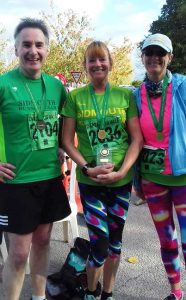 Three Mighty Greens took part in the Dartmoor Vale Marathon on the 28th October. All 26.2miles of chilled northerly winds and many hills were braved out by Dave Wright, Jane Hemsworth and Jo Earlam. The start for this event was from Sibelco, East Gold Works which is next to the Newton Abbott Racecourse. It then headed off out along the busy main roads of The Teign Valley into the villages of Kingsteignton and Chudleigh and then on along country lanes beside Ugbrook Park, which is a seemingly never ending hill. Two laps were completed by the marathon runners.
Jo, who including this one has done a total of 64 marathons, didn’t really get the runner’s high out there, but did find herself matching her halfway time of the Exeter half marathon in 2h:16m:46s. at least she can claim to be consistent. For the first lap Dave led the Mighty Green team, with Jo and Jane further back encouraging each other to keep on at it, eventually catching Dave up at around the fourteenth mile. The trio then walked and jogged together egging each other on to the end with Jane Hemswoth gaining first MG across the line, first Vet Lady 60 across the line with a time of 4h:57m:41s and 76 overall. Jo Earlam crossed the line one second later and got the 77th place overall and then in 78th, was Dave Wright who now has two marathons successfully completed with a timing of 4h:58m:54s . 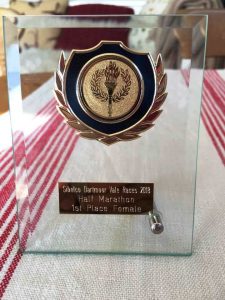 There was a half marathon in which Kirsteen Welch took 1st female in a very fast a typical Kirsteen speedy time of 1h:27m:56. She came in 8th overall. 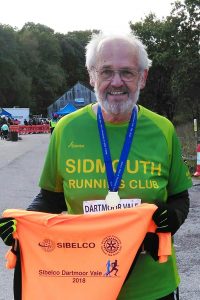 Also David Skinner took part in the 10k Dartmoor Vale Sibelco race and squeezed a good time of 1h:07m:43s to come in 149th.