On the 22nd of September Rocker Shepperd took The Mighty Green on The Tree Peaks Challenge. This epic endurance adventure takes the participant up the three highest peaks of the U.K. Starting in Scotland with Ben Nevis then on to Scafell Pike in the Lake District and finally Snowdon in North Wales. The total distance covered is around 42 kilometres (26 miles) with a total ascent of 9,800 feet (3,000 m). The challenge is to achieve all three peaks within 24 hours.

Rocker was part of a group of eight people who got together to take on this challenge and raise money for a local charity while doing it. The team chose to support Sidmouth Living With Cancer and consisted of Snowdon White (Gwenan Paewai) and the 7 Sids (Rodney Cross, Jud Lascelles, Mark Bishop, Rocker Shepard our Mighty Green, Ollie Derryman, and Jake Voss). 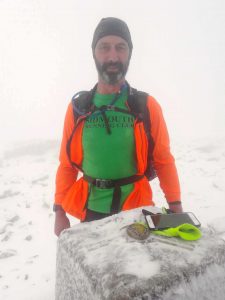 At this time of year it can get very cold at the top of these mountains. The weather can also change very quickly as Rocker was about to experience!! He was leading at the time and had not been up Ben Nevis before, with no footpath to follow and a white out to greet them at the top, navigation became difficult. However, he followed the marker stones that he’d read about up to the trig point. The Mighty Green shirt was worn with pride at the top of Ben Nevis. 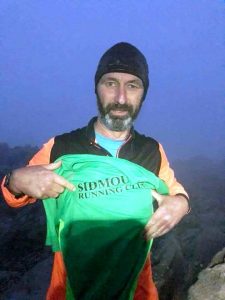 A bite to eat en-route, some shut eye during the long drive down to the Lake district to Scafell Pike. They set off up Scafell Pike with fading light. At the top of the Pike, the Mighty Green was shown, but as it was wet and had a slight aroma, it was not worn. The distance covered on this mountain was 8.6km and took 2h:45m. By the time they arrived at the summit of Snowdon it was pitch black but distant lights from various towns could be seen. The MG running shirt was by now smelling rank! It was still wet, and was in no way fit for the owner to wear it! 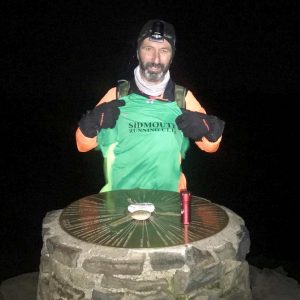 All three mountains were completed in under the 24hours so Rocker and his team retreated to the comforts of The Red Lion for a debrief and well earned rest and drink.
If you wish to donate to their chosen charity then please visit https://mydonate.bt.com/fundraisers/7sids