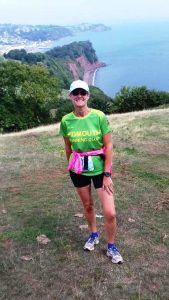 On Saturday the 1st September Jo Earlam completed the City To Sea Marathon. This brings Jo’s total to 59 completed marathons and was the third time competing in this very tough competition.

This 26.6 mile marathon is deceptive in that the first section from the start line in Exwick to  Cockwood and Dawlish Warren is a flat trek along the River Exe, Exeter Canal and Exe Estuary. During section two between Cockwood and Shaldon the hills start to kick in, softening up the legs for the real work to come later. Stage three and leaving Sheldon behind is where the hard work really starts, with a steep climb up a monster hill above Ness Cove, Smugglers Cove and Labrador Bay. The undulating coastal path doesn’t let up with the pain inducing hills, as it follows the coastal route all the way to Babbacombe Downs.

Jo found section three really tough, especially the steps which are very steep and seem to go on for ever! However, she had kept something in the tank for the last six miles and with determination and grit, she still managed to pass by a lot of other runners, whilst not allowing others to pass her. Then, during the last two hundred yards just before the finish line, one runner trotted past her as if he was just starting the race! He encouraged her to sprint for the line with him. It turned out that whilst she had just completed the marathon and was on the floor, he had finished the ultra and seemed ready to go again. 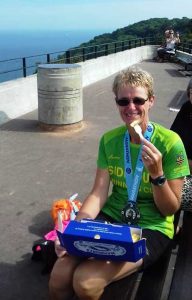 Jo finished with a very good time of 5h:57m:14s, coming 90th. This was not as fast as the previous year but better than 2016. Her well earned reward for the long and arduous race was Fish and chips at Hanbury’s Fish Restaurant