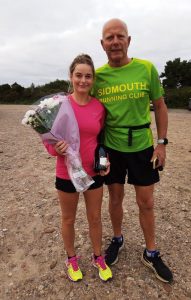 This Bank holiday Monday evening saw an historic moment in the club when the Chairman, Terry Bewes welcomed our 200th fully paid up member of the year. This came around after several weeks of an anticipated landmark point for Sidmouth Running Club. Kat Hall, who has been running alone for a while and had been put off from joining a club, out of fear of being left behind. Her husband Antony a club member and marathon runner kept telling her how the club supported runners off all ages and abilities. He encouraged her to give it a try and on Monday evening she did. Meeting at Joney’s Cross she joined in with seventeen other members for a 5 mile run over Alyesbere Common led by John and Ben Chesters.

After the evening run, she said that she had really enjoyed it, had received a warm welcome from all and was now looking forward to running regularly with the club. She thanked all present for the flowers and wine presented to her to mark the occasion.

The Sidmouth Running club is a friendly club, has an inclusive outlook giving encouragement and support to all no matter what the running ability of the individual. Terry offers an open invitation to all those who will be running the streets of Sidmouth during the winter months, whether they run alone or with others. Why not come along and try a couple of evening runs with the club on either a Monday or Wednesday 7pm from the sailing club from Monday 17th September.