A sunny summer evening welcomed runners from local clubs for the annual invitation event, the Woodland Relays, which was hosted this year by Sidmouth Running Club on Salcombe Hill on 20th June. Having initially expected 30 teams the Club was delighted with the turnout of 63 teams of three people from local running clubs such as Axe Valley, Honiton, and Exmouth, as well as teams from the Met Office, Dukes, Cranbrook Scouts and many others. All ages and abilities were catered for with Under 11 teams such as ‘The Young Coyotes’ and ‘Cos Girls Can Run’ competing over the short course whilst the aptly named ‘210 Years and Counting’ team from Sidmouth Running Club took on the long course. 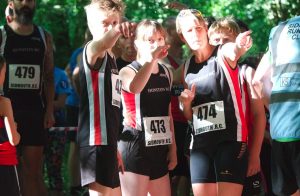 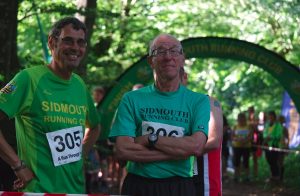 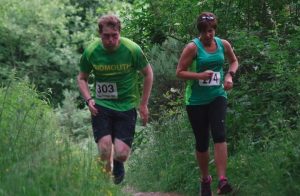 Sidmouth in the woods 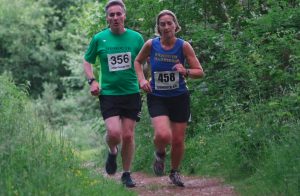 Sidmouth Running Club Chairman, Terry Bewes, thanked the many club members involved in organising and supporting the event. ‘Many members ran for their club including some from this year’s beginners group and we were delighted with Toby Garrick who was the fastest senior male over the long course. But a huge ‘well done’ also needs to go to all the helpers, from those that set out the course, to the marshals, the timer and number recorder, water providers, photographer, First Aid support and most popular, the catering crew who rose to the occasion and provided an awesome array of cakes and bakes.’