Ultra Hot for David on Dartmoor

Whilst many of the Sidmouth Running Club’s women were taking a deep breath after their stellar efforts in the Women Can marathon, one of the men decided it was time to test himself. David Chipping took on the Dartmoor Discovery 34 Mile Ultra run on 2nd June. This year was the 20th anniversary of the race which is organised by Teignbridge Trotters and is known amongst ultra runners as the UK’s longest single lap road ultra marathon.

The race starts and finishes in Princetown but takes in many spectacular Dartmoor sites (and hills) as it passes through Dartmeet, Poundsgate, Newbridge, Ashburton, Buckland, Widecombe, and Postbridge. David Chipping was one of 186 runners who managed to complete the race despite the very hot conditions, and was the only runner from Sidmouth to take the challenge. ‘I managed it in 6h12m’, said David, ‘it was a great run, but very hot and very hilly – 4000ft of climb’. 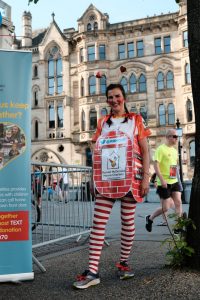 Meanwhile the Club’s record breaking fancy dress runner trialled a new outfit in a half marathon in Manchester. Naomi Garrick cast aside the famed wedding dress, and settled down in a nice little house outfit for a half marathon in Manchester. She was raising money for the Ronald McDonald House charity which supports families with children in hospital by providing accommodation. ‘The house costume fell down twice during the run’ said Naomi, ‘but I managed to cross the line in 2h09m and I raised around £600!’

Sidmouth Running Club is now making preparations for hosting the annual Woodlands Relay Races on 20th June. The Woodland Relays are a series of races between East Devon clubs with each taking it in turn to organise a venue of their choice. Club runners will form teams of three and each will complete either a 1.2k or a 3.4k loop on the top of Salcombe Hill before handing over to the next team member. With lots of different categories of entry it’s a low key fun event where finisher’s cake is more sought after than prizes.
More info at www.sidmouthrunningclub.co.uk