Grizzly training for the tough

Every year at about this time Sidmouth Running Club members can be found getting up to all sorts of eccentric activities as they prepare for the annual challenge of ‘The Grizzly’ on Sunday 18th March. This year was no different.

The Grizzly is an epic 20 mile off road event that takes in beaches, bogs, cliffs, rivers and valleys in East Devon that has become legend in the running world. It takes a lot of grit and a lot of preparation and 17 members of Sidmouth Running Club had just that in mind when they planned a club outing for training on 4 March. They hadn’t factored in the snow that fell in abundance in the few days before the trip.

Undaunted they set off in the coach, with one group being dropped at Seaton for a 12 mile jaunt back to Sidmouth along the coast path while another group went on to Colyton and followed the East Devon Way for 14 miles back to home. 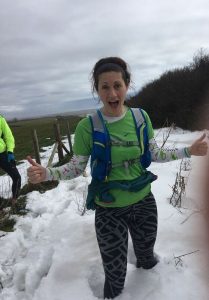 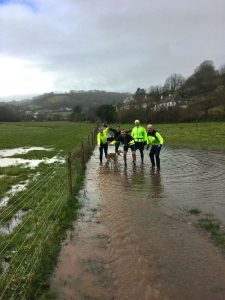 Els Laureys and Polly Walton were in the coastal group and agreed that they’d experienced four seasons in one run. ‘We ran through hail, rain, sunshine, icy rivers and muddy fields and then at Weston Trig ploughed through knee-deep snow, but we had an absolutely great time’ said Elys. ‘We danced the conga, threw some snow balls, joked around and enjoyed the scenery’. ‘We did the 12 miles’ said Polly ‘it was very leisurely for us, but a lot of fun & we had a lot of snack breaks’.

New club member John Sharples enjoyed the experience. ‘It was like being a kid again. Playing in the snow, jumping in the big puddles, sliding in the mud, flapjack, chocolate, Stanley the dog. Oh yes, and some running’.

Meanwhile Cath Miller was on the East Devon Way route under Don Cawthera’s navigational guidance. Cath said ‘it was beautiful to look at but I was not prepared for the melting icy water! I think we ran with frozen wet feet pretty much all the way’. Debbie Marriott agreed. ‘They were tough routes, but fun. The sort of fun that you enjoy after the event’.

All agreed it was a good preparation for the Grizzly and the Grizzly cub run, as it’s good to get to know the hills and it seems the weather will be quite similar on Sunday.