Sidmouth Running Club Members have been taking advantage of the beautiful weather and spectacular local trails to get some off road training miles in ahead of the winter series of local trail events.

20 club members, led by Head Coach Tim Mitchell, are spending Wednesday evenings on a 10 week programme focussing on technique, pace and stamina for off road running. Putting some of that learning into practice group members were out and about running the footpaths and lanes this weekend.

Hamish Spence led one group, consisting of Bert Dykema, Cath Miller, Paula Farrand, Polly Walton, Kerry Boyle and guest Sam. This group planned 7-8 miles but setting off from the Sailing Club their route by the golf course to Mutters Moor, Ladram Bay and back to Port Royal turned it into a 9.5 mile run. 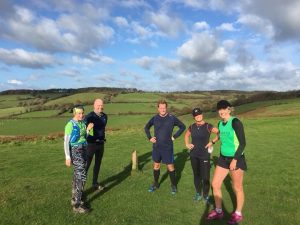 Meanwhile it took a bit of teamwork to navigate another group consisting of Terry Bewes, Sue Colman, Kate Johnston, Debbie Marriott, Monica Read, Cathy Keast and Don Cawthera. The planned route up the Otter from Newton Poppleford to Ottery and then up along East Hill to White Cross and down through Harpford Woods was spectacular, but longer than planned. Terry Bewes said ‘It was a fantastic route encompassing fields, lanes, river bed, woods and views to die for but closer to 12.5 miles than the planned 9-10!’ 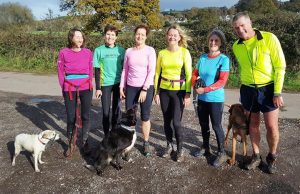 ‘We are preparing well and hoping Sidmouth Running Club will be out in force at the upcoming local events – the Bicton Blister on 27 November and the Otterton Reinder Run on 2 December.’

Both events have different distances on offer and a warm welcome for runners of all abilities.