Any Mile is Better for Dementia Campaigner Jo

Sidmouth Running Club member and coach Jo Earlam has just completed an epic 10 half marathons in 4 weeks to raise money and awareness for dementia, with the vision that ‘Any Mile is Better’. The 130 mile route was completed in sections by former south west journalist Jo, supported by friends and family. 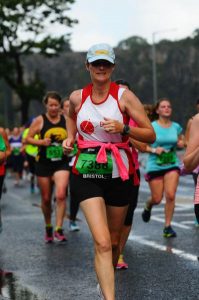 Jo, a 52-year-old former newspaper and BBC local radio journalist, has completed a variety of self-organised challenges for several different charities over the last 20 years. As a supporter of the Bristol based dementia research charity BRACE, she wanted to organise a special event to mark the charity’s 30th anniversary year – the original idea being to run from Swansea to Plymouth, taking in all the centres where BRACE funds research, covering a distance of around 260 miles, or 10 marathons.

Following the sudden death of her mum, Rosemary, in April, and the diagnosis of her husband John with cognitive impairment and early signs of dementia in June, Jo decide to modify her plans.

Jo said: “These life events had a significant impact on me and the type of challenge I can commit to. As a carer, I need to balance things I now do around John. Being away from home for an extended time would be difficult, also fitting in the extra training needed for a longer sustained physical challenge.

“John’s has already suffered strokes and the prognosis of increased risk of developing vascular dementia and Alzheimer’s makes me determined to do something. My original idea was no longer feasible, but the reduced route distance and staggered time lapse of this challenge was achievable.

“The concept that any mile is better than none was inspired by a walk I regularly do, of about a mile, with scenic views and points of interest. It’s always a boost to get out in the fresh air and countryside even for 15 or 20 minutes.

“Physical activity plays an important part in helping to stave off dementia, which is one of my worries about my own health. The more we can do to raise money, awareness and stay healthy, the better chance there is of combatting this cruel disease.”

BRACE chief executive Mark Poarch said Jo’s a true inspiration to fundraisers across the region. “I’m always impressed by people who run to raise money for BRACE, but going from Bristol to Exeter is something else.The money Jo is raising will help fund leading edge research into the causes of dementia so we can move closer to developing effective treatments in the future.”

Read more about Jo’s experiences and make a donation at https://anymileisbetter.com