One of Exeter’s biggest sporting events took place last weekend when the Great West Run returned. The annual half marathon, now in its 32nd year, saw 2500 participants race through the city’s streets for 13.1 miles cheered on by thousands of supporters. 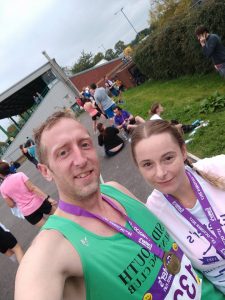 Sidmouth Running Club fielded a near battalion with at least 15 runners in the ‘Mighty Green’ in Exeter last Sunday. Leading the way for the East Devon Club was experienced speed man Justin Ashby who turned in an impressive 32nd position overall before commenting, ‘oh man, that was hard work’. Justin was hotly pursued by Sidmouth runners Antony Hall and Julian Bartlett. Father and daughter duo Alan and Sasha Colwill turned in sub 2 hour times, as did the Queen of Stamina, Jo Earlam, in the final stage of her campaign to complete 10 half marathons in four weeks. 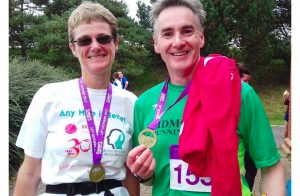 Whilst David Wright, Rocker Sheppard and Paul Wright narrowly missed the two hour mark, and were closely followed in by Sam Ingram and Kat Hall, secret training from Mike Lee delivered an excellent result in under 2 hours 10 minutes Amelia Frankpitt, was not far behind, going from strength to strength and the Green field was completed by good runs from John Sharples and Christie Ward