Polly at the Eden Project Marathon

In late April my dream of running a marathon came to an abrupt halt after spraining my ankle on the Cornish coast path. Frustrated, but determined, I lay on the sofa, elevating said ‘cankle’, and started looking into possible future marathons. The Eden Project Marathon, with its variety of terrain and spectacular scenery immediately stood out. Family and friends can visit for free on the day, which was also a massive bonus.

As I nervously waited for the race to start they announced that the route might have to be cut short because they couldn’t remove the cows from Helman Tor. I’m not a big fan of cows, but my first thought was whether I would have the energy to do an extra loop in order to complete the full 26.2 miles? That thought was interrupted by the starter’s gun, and I forgot all about it, too busy taking in the sights and watching my feet as I jumped over rocks and tree stumps in the woodland trails.

Shortly after the 4-mile marker we were back on the road, climbing the steep hill through the village of Luxulyan. I definitely would have walked this bit had it not been for the fact that my family had said they might try and spot me here. My legs were starting to burn just as I heard some very welcome voices shouting from the top of the 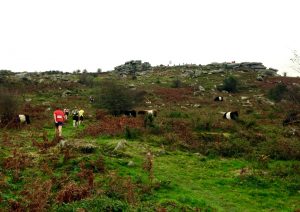 hill. On a high, I ran up to grab some jelly babies from both my boys.

The course was pretty hilly, totalling 2782 feet of elevation gain, and at mile 5 we all seemed to slow to a gentle plod just as the leaders of the half-marathon, who set off 20 minutes later, started sprinting past us up the hill. Everyone was cheering and it really broke the ice. The runners all began chatting, and for a while I kind of forgot where I was, and could have just been out on a social run.

A few miles later, the 850 half-marathoners peeled off leaving 250 of us to plod on towards Helman Tor. As the Tor came into view I remembered the announcement at the start. I was relieved to see a steady stream of people walking up the hill, but couldn’t fail to notice all the cows. As I started to climb, two of them were very close, possibly wanting to cross our path. I was jogging cautiously and then suddenly one of them ran straight at me. I legged it… straight into a thorny bush. The cow turned & I just kept on moving. My heart was racing, my head was blurry, but before I knew it I was at the top of the Tor, having been totally distracted by the random bovine encounter. I took a moment to breathe some air and take in the stunning view before starting the precarious descent. 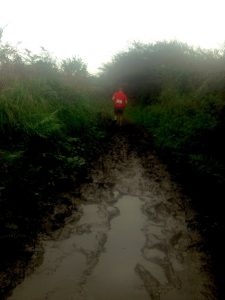 After a short stretch on the road the course became a bit grimmer. The weather on the day was pretty darn perfect for running, but recent wet weather had taken its toll on some of the trails and the mud became gloopier, before I found myself ankle deep in water. Trying to ignore how heavy my feet had become I was spurred on by the long downhill and the half-way point. The course is a figure of eight, so soon we were back on familiar ground and running through Luxulyan a second time. After seeing some photos of the flooding on the course the week before, I’d asked my husband to bring some dry shoes and socks in case mine got soaked. The marathon had started to do funny things to me by this point though and I no longer noticed how wet my feet were or that my legs were cut by thorns. I think I was in the zone! But it didn’t last long. Around mile 18 my energy was running out, I started feeling a bit light-headed and my legs suddenly felt like dead weights. It was time to have a walk and get some flapjack & energy drink inside. The next few miles were tough so I started doing some drills which we had been taught on Tim’s running course… head high, hips forward, arms back, elbows in, and pretending to clean dog mess off your shoes on the downhill sections. Focussing on my form distrac

ted me from my aching limbs.

At mile 21, my husband & my mum appeared unexpectedly and it gave me just the boost I needed. My body hurt but I realised how close I was. I started getting my energy back and was enjoying the ever-changing landscape from the rolling hills to the clay pits on the Eden approach. As I started to descend towards the Biomes my legs started moving faster and faster and I felt so lucky to be doing this and to have this impressive backdrop at the finish. I crossed the line in 4:38:52, which I was chuffed to bits with. I passed on the family ice skating and went to grab my goody bag… a hot burrito (they’d run out of pasties) and a pint of ice cold Tribute ale.

This was a really well organised event, supported by a fantastic bunch of marshals. I’m not sure what I expected, but it was an awesome day and an incredible first marathon experience.