Sidmouth runners have been out participating in a range of shorter, but nonetheless challenging events recently. 6 members of the Sidmouth Running Club took part in the Sidbury fun run on 10th September. Part of the Sidbury Fair week the course offered a 5.8k run for adults and 2.4k for children followed by a hog roast and prizes. Located in the parkland of Sidbury manor the first half of the course was steep and uphill and more ‘run’ than ‘fun’ according to Nigel Maeer, who completed the run in around 30 minutes. Paula Farrand ran a cracking race, and won the prize for the first lady. Paula’s daughter Amelie demonstrated her skills on the junior course and other club members including Tim Swarbrick, Bert Dykema and Bill Valentine all showed the Mighty Green in action on local tracks. 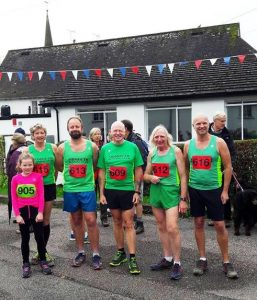 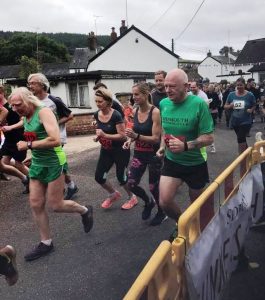 Start of the fun run 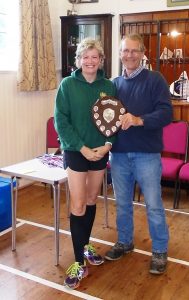 Paula with her trophy

Away from the valley, two SRC runners also competed in 5k races. Ellie Keast was 3rd lady home in her local Park Run and in Exeter Lara Millmow joined over 1,100 runners for the 18th Michelmores 5k Charity Run on 7 September. The aim of this annual event is to support Michelmores’ Charity of the Year which this year is Balloons, a local charity that supports bereaved children and their families in Exeter and the surrounding area. 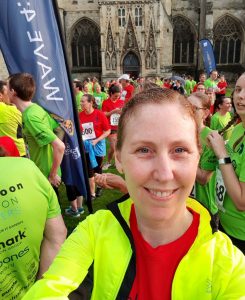 Lara at the Michelmores 5k

The runners were ‘treated’ to a warm-up by a Royal Marines Physical Training Instructor at the Race Village on Cathedral Green before setting off in waves based on expected finish times, to ensure that every runner could complete the run at the perfect individual pace. Spirits were up even the rain was coming down, which luckily stopped just before the first wave set off, helping to cool the runners. The run ended on a high note with cheers, sunshine and prizes at the finish line.

This was the second 5k for Lara Millmow of Sidmouth Running Club, who only started running in January. “My aim for the 5k was to help raise funds for this worthy cause and also to complete the run without stopping, which I achieved. I’m proud of my result and couldn’t have done it without the encouragement and support of the club.”