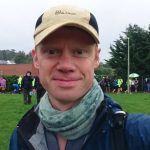 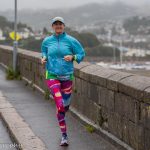 The first half, from Exeter to Dawlish Warren is entirely flat, easy going along the estuary cycle path, but after Shaldon, the route becomes a roller-coaster – the hills a series of switch-backs, no sooner up than plunging down again. Sidmouth runners Jo Earlam and Jim Forrer represent the full range of experience – for Jo this was her 54th marathon, and it was Jim’s first. 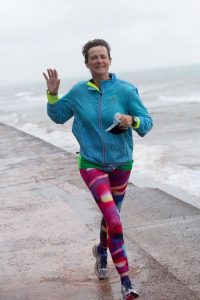 Jo, who completed the race last year said ‘In one mile I counted six huge climbs and drops. Because I knew what awaited en route to Babbacombe I was mentally prepared, ticking each one off with a steely determination. Each time I saw someone up ahead I tried to push on to catch up with them, that way I passed several people, and no one passed me. I slowed down, to around 17 minute miling, but that was a lot better than last year, when these six miles took me over 2 hours’.

Jim ran a different race admitting that he hadn’t initially realised quite how pointy the elevation graph was towards the end. Having taken advice he set his target time at 5 hours, and put in the training over the summer, fitting around family holidays.

Of his first marathon he said ‘Of course I set out far too fast, happening to be in a group near the front. I figured a positive split on this course was inevit 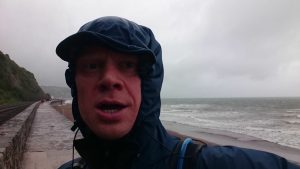 able though and embraced it. After doing a 54min 10km at threshold heart rate I soon found myself going slower and slower until the number of people passing me made it feel like I was going backwards; this was a distinct low point’.

However, runners were well looked after in the event and Jim soon rallied, enjoying the flapjacks and coffee at the 20km checkpoint and the coke, potato wedges and chocolate at 32km.

‘The long coastal wall stretches felt a little treacherous but provided an epic atmosphere watching the crashing waves and the cloud-covered hills to come’ said Jim. ‘The deluge was face-stinging for the final 10k but I had run it in training and knew what was coming.  Despite being tired and wobbly a bit of runner’s high kicked in and I started taking back some of the placings I’d lost earlier. By this point though the five hour mark was out of reach although I didn’t mind at all’.

Both runners enjoyed the rewards at the finish (including Fish and chips for Jim!) and paid tribute to the beautiful route and dedicated marshalls. 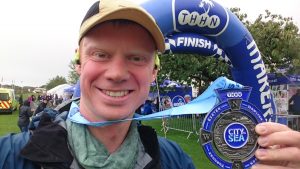 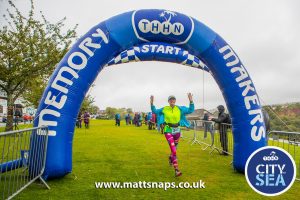 Very pleasing results for both runners saw Jim complete in 5 hours 7 minutes and 26th place out of 247, with Jo completing in under 5 hours 30 minutes and 42nd position, an improvement of nearly 40 places on last year.