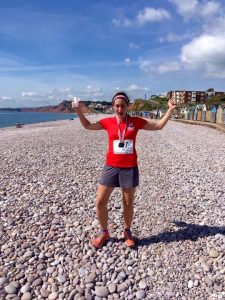 Six members of Sidmouth Running Club braved the scorching Bank Holiday weekend sun to compete in a couple of tough off road events. On Saturday Polly Walton and Tim Swarbrick had great runs in the 10th Jurassic Coast 10k, both finishing inside the hour despite the heat and a hilly course.

Starting at Budleigh the course follows the coastal path to Ladram, then along the River Otter and ending up back at the start with a dip in the Big Blue for Polly after she finished. Polly and Tim did not know each other as Tim has only recently joined the club and Polly has been recovering from injury. To confuse things even more, competitors were asked to wear the charity’s red vest so it was a mighty coincidence that they finished within one second of each other. Polly 56:59 and Tim 57:00.
There were 290 finishers.

along hilly lanes, muddy tracks, beautiful woodland and across the river Bovey (where one competitor was spotted submerged to escape the heat) before spitting them out into the village show field and the cheers of the supporters. The Lustleigh Show is the quintessential English village show with competitions ranging from ‘the best three carrots’, to hay bale throwing, to ‘the dog with the waggiest tail’ all accompanied by a jazz band and copious quantities of local food and drink.

The Sidmouth contingent were in preseason training and put in good times to achieve 4th Lady (Ellie Keast), 5th Ladies team (Ellie Keast, Cathy Keast and Monica Read) and good maintenance times from Dave Wright and Chris Robinson who was completing the race for the 13th year in a row an. Big Jim Pyne and son Sam were last seen at the front of the field cheered on by Sidmouth supporters who whilst not fit to run managed to cycle up to the moorland village to cheer the runners in.