It has been a very diverse week for the Mighty Green runners from SIDMOUTH running Club with an outstanding half marathon time with a personal best to charity runs, obstacle runs and getting covered in paint. 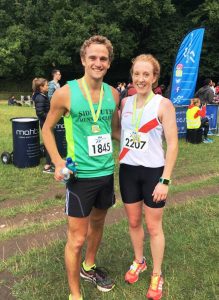 The outstanding runner of the week would have to be Theo Burgess who has only recently come back running with the club following a bout of injury problems. Theo travelled up to London to enter the RunThrough Richmond Park half marathon. Gathering at the start, amongst the other runners he met Lorraine McNulty a former club member who now lives away.

This was the first time that the RunThrough organisation had organised a race in the incredible Richmond Park in 2017 and it was a sell-out. Theo said “It was very interesting running through a park with herds of deer instead of fields of sheep and cows as I do around Sidmouth”. It is a four lap race on the paths around the park and comes with chip timing on each lap so you can track how well you paced yourself. Theo’s lap times were remarkable 22:05, 22:06, 22:58, and 21:51 giving him 7th place overall out of 385 finishers and 3rd in his age group. And the icing on the cake was knocking 5 seconds off his personal best time to finish in 1:28:59. Theo you did the club proud. 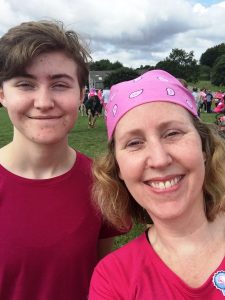 It is now seven months since American mother and daughter Lara and Yasmin Millmow took up running and joined the club. Now they set off to Exeter to complete their first 5k and for such a good cause: to raise money for cancer research. It may have been overcast, but the hundreds of pink shirts shone brightly during the Race for Life at Westpoint. The course was a mixture of grass and tarmac and everyone went at their own pace, whether running, jogging or walking.

They mostly ran with a few periods of walking to experience the atmosphere ultimately finishing in 34:29. In American speak “not too shabby for a Sunday morning, considering” Pink was definitely the colour of the day, as by the end of the race Lara’s face was the same colour as her shirt. Having now set a baseline time, they are looking forward to signing up for their next 5k in the autumn, this time in their Mighty Green. Final word from Lara” It felt good completing the course, and doing our bit to help beat cancer”. Well done ladies good job! 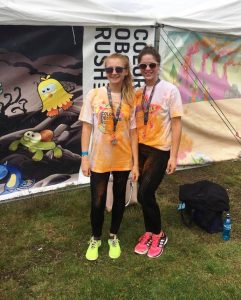 On the not so serious side Bethany Wells and her friend Katy Lanson headed off to Exeter Racecourse for the ‘Colour Obstacle Rush’ this is marketed as ‘the most fun running event ever’. It is a unique event combining the fun of the colour powered runs with the thrill of an obstacle course and the atmosphere of a music festival. Although this is a 5k ‘running event’ you don’t have to run if you don’t feel like it. In fact usually there are as many people walking or dancing through the course as running. There are 20 obstacles, 8 colour stations, 20 music zones and a chill-out area after the finish with loads of ice cream to eat as you recover. Covered from head to toe in paint Beth said “this was the most fun running event ever”. 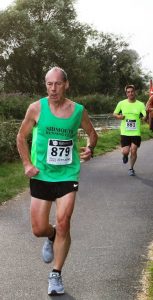 And now back to the serious stuff, Rob Edwards and Adrian Clode headed to Exeter for a flat 10k. This is one of the City Runs and takes place along the river. Starting from the quay, it is a 2 lap, traffic free, pancake flat run on the footpaths and cycle tracks around the river Exe and Exeter Canal. Adrian finished in 47:13 and Rob in 49:06 which gave him a 2nd place in the 65+ category. There were 378 finishers.