The Torbay Half Marathon 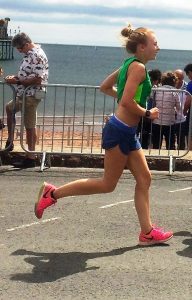 w the 26th running of the Torbay Half Marathon. The race starts on Paignton’s Eastern esplanade at the pier and is a two lap traffic free route taking in the stunning coastal views across Torbay.

Starting with one lap of Paignton Green it then head towards Torquay where the course passes the historic Torre Abbey and the Princess Gardens where you turn and head back to the finish on Paignton Seafront.

Four members of SIDMOUTH Running Club took on the challenge in ideal conditions after the recent heatwave. There was a special incentive for Beth Wells as she had been promised a Weatherspoons special meal if she did well, and she did. Being paced by Danny Painter she knocked 13 minutes off her previous time, something she is becoming quite accustomed to in each race she enters.

Tim Clay also had a target in mind, running a sub 1:50:00 but despite a superb effort he missed it by 22 seconds. Sneaking in under the radar was Susie Perry as until I checked the results I didn’t know she was running, but she too came in well under the 2 hours. 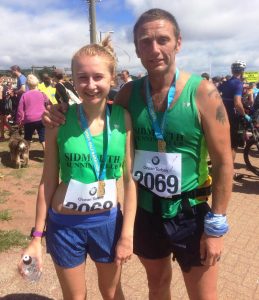 As for Danny Painter despite running with Beth he somehow returned a “did not finish” but I understand that the organisation at race HQ left a lot to be desired.

Danny Painter finished just behind Beth. There were 1563 finishers.

The Club extends its congratulations to Tim Mitchell who has passed the England Athletics four day Coaching course.

Latest entry into the Mighty Green on Holiday challenge comes from Anna Read in Corsica.

The club will be represented by six teams in this week Woodland Relays race.