The Umborne Ug is a truly village event organised by Rick and Eleanor Wood of Axe Valley Runners and the Umborne Hall committee in aid of the village hall funds. It is described as a scenic multi-terrain 10k run starting and finishing at the village hall. What it fails to mention are the two monster hills en route. Eight members of Sidmouth Running Club boarded the coach for the evening start and after a somewhat rainy day, on arrival the sun came out and it turned into a lovely evening. To involve all the villagers as well as the 10k there is also a 2.5k fun run and a walking route. 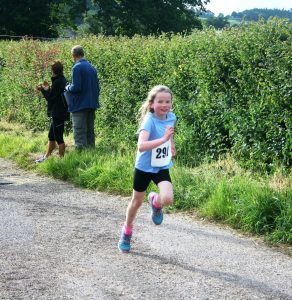 Once again it was left to our junior member to bring home the medal. Amelie Farrand entering her first race for the club in the fun run finished in 13:54 giving her 3rd female overall and first in her age group and the big smile on her face as she finished showed there is a lot more to come from her. Big sister Ellis was entrusted with the camera to record the event.

In the 10k there was a club record to be set for this event and Rob Edwards had his eye set firmly on this. Galloping away from the rest of us at the start I was not sure whether it was to win or the delight of leaving three grandchildren at home with his wife Sue. And so he led the club members with his eye on the record until entering the home straight when the vision of the bar-b-q’s appeared before him and his mind turned to that tasty veggie burger in his hand and that lapse of concentration allowed Paula Farrand to fly pass him to set the record at 1:00:02. Rob finished in 1:00:47. Next home were those competitive identical twin sisters Christine and Karen Farnham and I still cannot tell one from the other, however on this occasion Christine finished in 1:04:11 and Karen in 1:04:16. John Doherty who only decided to enter the night before had an equally good run 1:10:28. Our two youngest competitors Beth Wells and Caroline Ball both had excellent runs. Beth who continues to improve with every race had a very even-paced run even running a good distance up the two hills and finished first in her age group while Caroline who somehow managed to talk all the way around the course took a fair amount off her previous time for this distance. 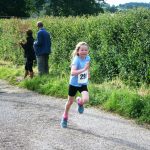 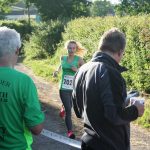 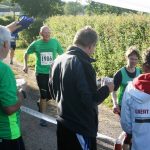 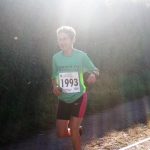 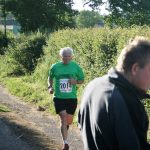 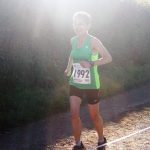 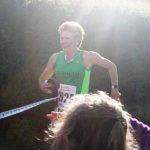 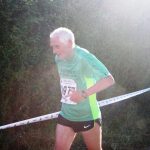 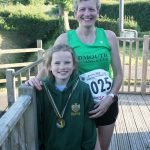 Beth 1:13:33, Caroline 1:15:16. Bringing up the rear was Terry Bewes 1:15:17 who although was the last of the club runners was first in his age group but a reality check showed he was the only one in that group.

Racing over it was now time to enjoy the delights that the organisers had provided for us. In the hall, tea, coffee and a magnificent array of cakes, a bar and outside a range of bar-b-q’s cooking, beef, pork and apple, lamb and veggie burgers and hot dogs with real butchers sausages forming an orderly queue behind Rob we soon settled down to enjoy the food and banter in the fading sunlight before boarding the coach home. A great evening out enjoyed by all.