It has been a very varied week for members of Sidmouth Running club with a park run, 10k’s, marathon and a 100k ultra marathon completed.

The Jurassic Coast 100km event starts in Weymouth and finishes in Exmouth. Runners have 24 hours in which to complete the course either individually or in teams, running or walking or a combination of both. Jenny Bentley and Debbie Marriott took on the challenge with Jenny raising funds for HCPT Lourdes. The original plan was for Jenny’s husband Colin to run and Debbie to drive the support vehicle but a last minute injury to Colin promoted Debbie to runner and she enjoyed it so much that instead of finishing at Sidmouth as she intended she carried on to Exmouth. Both finished in 24 hours and 6 minutes, a remarkable achievement. 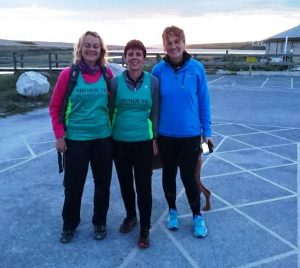 In Jenny’s words “The last stretch down the entire length of Exmouth seafront was hard, my legs were aching and my feet hurt so much as I walked, but strangely enough running slowly was easier and much to my amazement I ran the last one and a half miles”.

In Debbie’s words “Never, never, never again, but having said that it was a privilege to be involved. My son Sam who died in a tragic accident earlier in the year was a keen supporter of HCPT making the trip to Lourdes on a number of occasions and he would be amused that his involvement in HCPT resulted in my 24 hour, 100k walking torture, especially as he found walking to the shops and back a trial. I’m off to take up sunbathing and other lying down hobbies now”.

Both thanked Colin ‘the man in the van’ for the 24 hour continuous support and encouragement and all who sponsored and supported them.