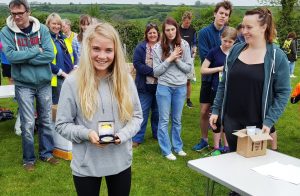 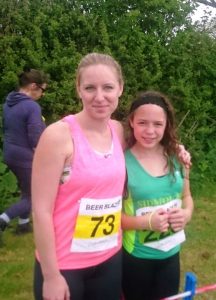 Once again it was Kate Marriott who brought home the silverware for Sidmouth Running Club, this time from the Beer Blazer. This race starts and finishes at Pecorama in Beer. It is a multi-terrain race in the true sense of the word over either a 5 or 10k traffic free course run over some of the famous ‘Grizzly territory’ and private land covering fields, tracks, the challenging pebble beach between Branscombe and Beer Head, the Undercliffs, The stairway to heaven, cliff tops and open common, all with breath-taking views of the Jurassic Coast.

Kate, who is 13 ran the 5K in the F13 category and was competing against many older runners. She came in 5th overall and was the first female in a time of 23:13. Also in the F13 another of our young runners Alicia Ranson finished in 33:35 and the video of her swerving past two adult runners in the last 10 metres shows there is a lot more to come from her.

Not to be outdone by the youngsters David Skinner who joined the beginner’s course in January took on this fairly tough course for his first race in the M70 category and was very pleased finishing 31st in 26:05.

Terry caught up with Janice on the cliff top before the run down into Branscombe where she was rolling around in the grass with severe cramp in both legs, he offered to help, but she said no carry on and I will catch you up and she nearly did. The question is whether it was her new shoes that caused the cramp and the blisters on her heels or retribution for leaving behind her Mighty Green shirt for the second time.