It was a day of mixed results this year for members of Sidmouth Running Club running the London Marathon. Pride of place must go to Justin Ashby who smashed the club record for the distance.

Justin who trained really well last autumn, (finally after 5 years of trying to break 36 minutes for a 10k succeeded in 35:30) and through this year has been feeling really strong with no injury worries and with the weather being perfect he thought he would have a crack at the record so he went for it. The club record was set back in 2014 by Malcolm Bayer a founding member of the club in a time of 2:42:55. 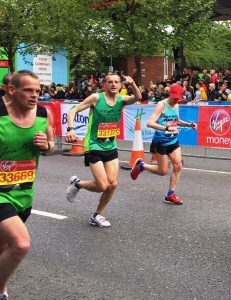 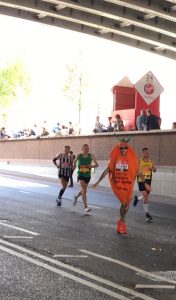 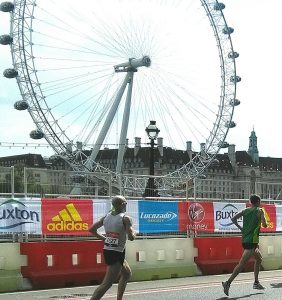 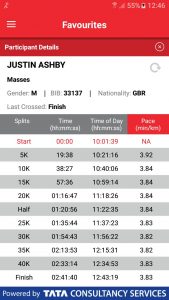 Justin finished in an outstanding time of 2:41:40 knocking 0:1:15 off the record. His overall pace was 6:09 minute miles and he was especially pleased with the negative split times (second half slightly quicker than the first) he finished 378th overall and was 17th in his age category. It was his day, his time and all those hours of training finally paid off. In his words “I loved every minute of it” you can bet there were many thousands of other runners thinking quite the opposite. A truly remarkable day for him. 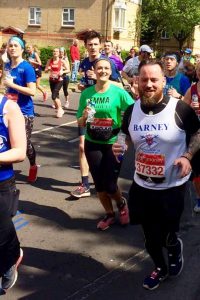 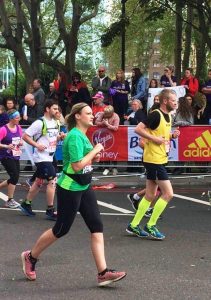 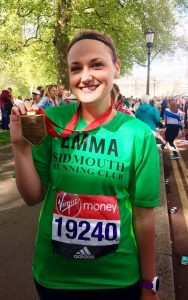 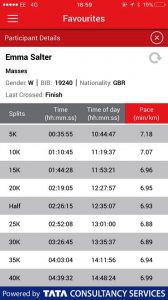 Another runner having an “awesome day” was first timer Emma Salter. Emma’s training programme was blighted by illness and injury but the determined young lady was always going to start and finish and with the encouragement of family and friends she was “absolutely chuffed” with her time 04:56:03 and was “on top of the world” at the finish. She held a steady pace the whole way round and was really pleased with the even split times. She had a special thank you to fellow club member Helen Palmer for her help and company on the long training runs and said she wouldn’t be there without her. That is the spirit that runs through the club.

There was a bitter/sweet strawberry story for Naomi Garrick who went for the world record dressed as a strawberry. She did beat the record by fourteen minutes in 3:59:38 but after crossing the line she was informed that another strawberry had squashed her time. She was berry upset and wanted to go bananas. She has now run out of juice but proud that she has completed six London Marathons all in less than four hours and four of them in silly costumes. 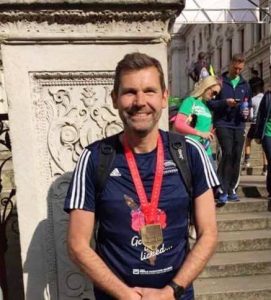 Steve Saunders had a race of two halves as they say in football but carrying a foot injury into a marathon is not a good start. He did manage to run the first half but the injury took its toll in the second. He was pleased he took part and did get himself through it and finished his third and final London Marathon in 5:00:31 with a smile on his face.

Becky Robson was very unfortunate to pick up a calf injury in the early stages of the recent Exe to Axe race. She only intending to run to Sidmouth as part of her training for London and despite pulling out at Budleigh Salterton as a precautionary measure and with intensive post run treatment, it did not heal in time for her to run. However she has renewed her focus on the upcoming Women Can Marathon.

The highs and lows of a week in running.