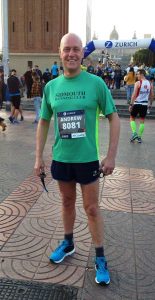 In the racing category Andy Shearer took himself off to Spain and along with his friend Kevin Druce entered the Barcelona Marathon. The great Catalan capital was host to the Zurich Barcelona Marathon which was reborn in 2005. The race starts in the Avinguda, Maria Cristina and the course it follows is one of the most attractive in Europe. The favourable climatology that characterizes Barcelona combined with a fully urban circuit that passes through the main landmarks of great interest for the runners. It was a very warm day with Andy finishing 4:20:00 and Kevin in 4:23:00 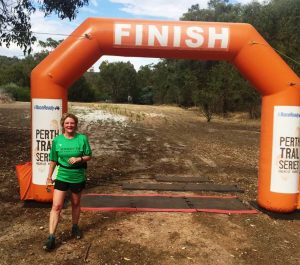 Meanwhile taking herself even further afield Milly the Marvel Frankpitt was in Wungong Dam, Australia. Milly just couldn’t wait to show off her Mighty Green shirt to the locals and after just 2 hours sleep due to jet lag wakefulness in the night she ran the 14.1k Darling Ranges in Perth then went straight back to bed.

With the upcoming Exe to Axe race on April 2nd we have been informed that the ladies record holder Annie Conway (Ambleside AC) has won the World Long Distance MR Championship in Podbrdo, Slovenia. In 2015 she came in second just 9 seconds behind Axe Valley runner Matt Clist. It was a very exciting finish as coming along the esplanade at Seaton she was catching him up. With the extended route this year to the Eastern end of the esplanade it would have been an even more exciting finish. There is still time to enter this race with entry forms on the club website or you can enter on the day.