Three members of Sidmouth Running Club put on their Mighty Green shirts and headed up to north of the county for the Bideford AAC half marathon. The race this year was run in memory of Geoff Fanson one of the founding members of the running section of the Bideford club. 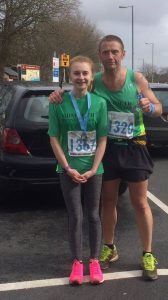 The course takes in the magnificent countryside alongside the river Torridge between Bideford and Great Torrington. The course is half on road and half on the Tarka Trail and you even get to run through a tunnel. The route is moderately flat with a small hill section. It was pretty windy though which made it a lot tougher.

Bethany Wells who joined the beginners course in January had set her sights on having a go at this race and despite being ill last week she still turned up at the Club for her 5 mile training run and was even more determined to complete the 13.1 miles. On the day however she did have the support of her step-dad, the well-known local marathon runner and back marker for JP’s Exe to Axe race, Danny Painter, who ran with her. Both turned out to be winners with Bethany finishing in 2:32:58 and despite Danny’s ‘encouragement’ she was still talking to him after the finish. A Mighty Green runner in the making Bethany, the club is proud of you. 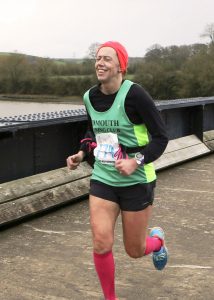 Sidmouth’s other runner Becky Robson had an eventful start. After a busy week at work she took a laid back approach to this race as preparation for the London Marathon, a little too laid back as it turned out as exiting the port-a-loo she found that the runners had set off two minutes earlier so she had to get a move on and still finished in 1:57:34. A lesson learned for London.

There were 1150 finishers showing how popular this race is particularly with personal best runners.