The Bridgwater to Taunton Canal Run

A 6am alarm and 4 members of SIDMOUTH Running club Sarah Watkins, Jessica Raynor, Dave Wright and Terry Bewes drag themselves out of their beds; look out the window to a scene of fog and frost and wonder, back to bed or run? As members of the Mighty Green there was no hesitation, run it was. So, into the car, and up the M5 through thick fog and minus 2 degrees to Taunton to take part in the 16 mile Bridgwater to Taunton canal run. This run, not a race is organised by Taunton Running club the biggest independent running club in the UK with around 750 members. 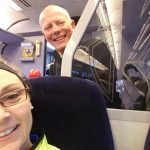 Terry & Jess on the train

The event starts with a short train ride from Taunton to Bridgwater and Terry was well excited about this because he had not been on a train for years.

So the four off us and the 80 or so runners from 8 different clubs left it until the last minute to emerge from the waiting room to get on the platform to avoid the freezing conditions. Arriving at Bridgwater station it was then a short jog to the start at the canal basin.

This was to be a new experience for us as we can normally be found running the hills and coastal paths around here. This was a nearly flat 16 mile run along the tow path back to Taunton. The conditions had not improved as we set off, it was quite eerie in the fog and it soon further deteriorated freezing the water in Terry’s water pack. 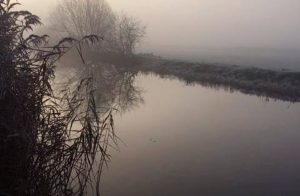 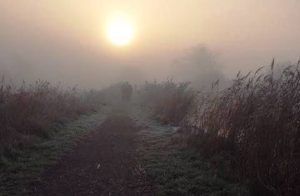 Is that the sun? 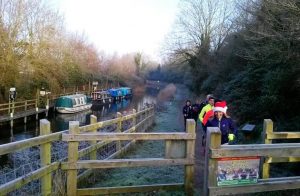 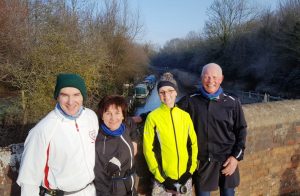 Arriving at Maunsel Lock which is around half way the Taunton club had laid on food and hot drinks for all which were well received. Suitably refuelled and thawed out we set off only to be told that the police had shut the canal a mile further on in order to recover a body. 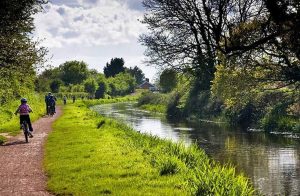 The canal in summer

Luckily with local knowledge and a mobile phone app a detour was sorted to take us around the closure. This came as some relief to us as it took us over more familiar terrain in the way of fields, lanes and paths. A couple of miles later we were back on the tow path and conditions had started to improve for the run to the finish.

Dave had a good run going ahead with local runners recording a time of 2:52:00. Sarah and Terry tried to keep up with Jessica who is 5 months pregnant and finished 20 minutes later.