As the saying goes things tend to happen in threes. It was only a few weeks ago that Club members entered the Delicious Drake’s Trail dressed as the British Olympic Equestrian team. This was then followed by an e-mail from Olympic event rider Mary King congratulating us on winning the ‘Spirit of the Trail’ award. And to continue the Olympic theme the Club has been honoured to welcome Jo Pavey MBE to come and run with us and enjoy a social afterwards.

The visit was arranged by our social Secretary Naomi Garrick who met Jo when she visited the school where she teaches. At the recent Rio Olympics, Jo aged 42, a mother of two young children became the first British track athlete to compete in five consecutive Olympic Games.

The evening was arranged so that all the members had a chance to run with her and judging by the number of members who were there no one wanted to miss out. This was the largest number I have seen and nearly all wearing the Mighty Green and they were not disappointed.

Before we started, Terry Bewes (Chair) presented her with her own Mighty Green shirt so she did not look out of place running with us. 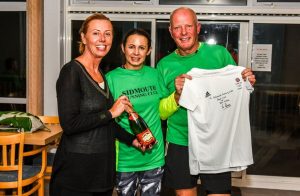 Back at the Club she spent a couple of hours talking to members and their families, signing autographs, posing for photos and generally enjoying herself. To all who had the pleasure of meeting her all agreed she was a genuine lovely lady who showed an interest in them and their stories.
At the end of the evening she presented the Club with a signed GB team
shirt from the Rio games and the Club thanked her with a bottle of champagne. Jo has agreed to become an ambassador for the Club and we all look forward to her next visit.