The final race in the River Exe 5k was run by two SIDMOUTH Running Club members with ages at either ends of the spectrum. A friendly Park Run sort of event it isn’t, with the last runner coming in under 25 minutes. With a field of over 100 fast young runners and everyone in Club vests, except Jason whose was in the wash, it is very competitive.

Even without his Mighty Green Jason Drew had a stunning run coming 3rd overall in 16:14:00 just 21 seconds behind the winner and as an under 20 he should still be improving. At the other end of the 108 strong field Rob Edwards in terms of age and speed avoided being last, just about. Finishing in 23:01, his quickest time since 2001 and placed 97th overall he was second M60+ which sounds ok until you realise that there were only 3 M60+ and all three M65+ runners were quicker. Anyway Rob it’s not the winning but taking part so both are looking forward to the start of the six races series starting again in April.

Sidbury Fair attracted two new and two stalwart members of the Club. New member Paula Farrand had a great start to racing in the Mighty Green coming first in the local Adult category in 33:52 and that time gave her 3rd place in the Adult Open. Had she been paying attention instead of soaking up the glory towards the finish she would have been second having been overtaken with a few strides to go. 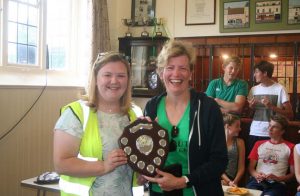 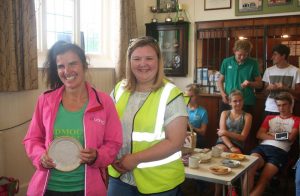 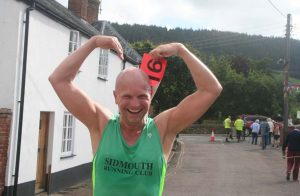 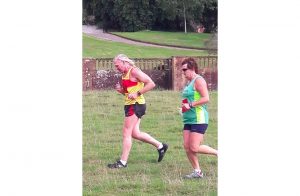 Naomi Garrick retained her open title wining in 32:39 but will have to be watchful next year with Paula just over a minute behind this time. Paula’s running buddy Bert Dykema also enjoyed his first race for the Club so much so that he couldn’t stop the Mobot at the end.

Rachel Burrow a long time supporter of this race also enjoyed the conversations on the way around.