A Tale of Two Marathons

Prolific SIDMOUTH Running Club marathon runner Jo Earlam took her total to 52 when she competed in the City to the Sea Marathon. The run started from Exeter Quay and finished in Babbacombe, Torquay. The run started with a couple of loops around the canal tow path and was totally flat for the first 13.5 miles to Dawlish Warren. There were a few smallish hills on the coast path to Teignmouth at 20 miles which she reached in under 4 hours keeping a consistent pace of around 12 minute miles. It was also the furthest she had run since the Portsmouth marathon in December and she was feeling in good form and pretty pleased with herself, despite very little training. Then came a series of tough hills for the last 6.5 miles, which reduced her time to what felt like a crawl and took a further two hours and 15 minutes dropping her pace to 20 minute miles. By this time it was also pouring with rain, but even moving at what seemed to be a snails pace she still managed to overtake a dozen or more other runners and let no one overtake her.

Jo grew up near Babbacombe so was delighted to reach the short road link to the finish on the Downs, only to discover that the course director had a final sting in the tail, sending them nearly back to sea level and then a climb up steep steps by Oddicombe Cliff Railway. I am sure she was not the only one muttering expletives at that point. However there is something about a hard, hilly finish in the rain that is particularly sweet and she crossed the line full of smiles and very happy to have made it number 52.

Meanwhile not that far away Danny Painter had headed off to Dartmoor to take part in the inaugural running of the Dartmoor High Ground Marathon.

What Jo was experiencing at sea level was 10 times worse on the top of Dartmoor. The Mighty Green vest couldn’t be seen beneath his storm jacket but then again not much else could anyway with the storm force weather and clag. The conditions made it more of a navigation exercise than a speed test. 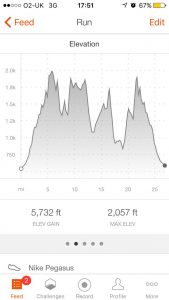 There is a mandatory kit list to be carried so you are prepared for all eventualities and you are not allowed to start without it such are the conditions. If you like fell races and the effect of running towards a fire hose on at full blast this is the race for you, and it proved so for Danny coming in 6th place with a time of 5:34:51, a very remarkable result.