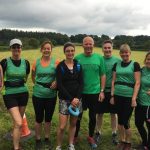 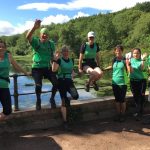 Head of the Otter 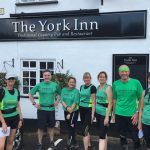 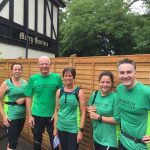 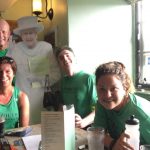 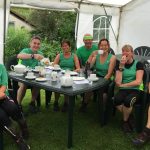 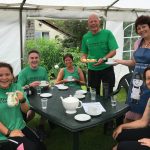 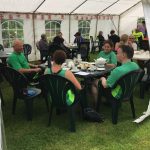 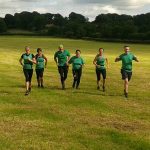 The Mighty Greens at the finish

Wearing the ‘Mighty Green’ seven members of Sidmouth Running Club headed off to the Blackdown Hills to run the Blackdown Beauty. This is the sister run of the Blackdown Beast which is run over a different course in January when runners battle wet lanes, boggy fields and indeed a bog. Runners could be forgiven for thinking they had entered the wrong race as the first mile of this run was through a sea of mud.

The run itself is billed as a social run as there are no numbers, and no times, only the challenge of completing this 18/19 mile self-navigation course. With the current excellent growing conditions the nettles were chest height, the undergrowth so thick and the corn so high that at times we lost sight of our shortest runner Abbi.

This is a lovely run through the beautiful Blackdown Hills taking in a mixture of lanes, trails, fields, climbing over a variety of crooked styles of which there were plenty and road, not forgetting the four pub stops on the way round.

There is another reason that runners return year on year and that is for the legendary cream tea laid on by the ladies of the Smeatharpe WI at Peartree Cottage, Stapley. There were huge scones, mountains of clotted cream and lots of jams plus endless pots of tea and a beautiful garden in which to enjoy it, the only snag is that there is still six miles to run afterwards.

At the finish you are encouraged up the last field to the sound of Chariots of Fire blasted out by DJ Howard Bidmead chairman of Honiton Running Club who organised this excellent event, and to make sure you do not go home hungry they even have a bar-b-que set up in a barn with plenty of food and drink on offer, hay bales on which to relax and enjoy it and all in the name of charity, raising over a £1000 for Macmillan.

Meanwhile making a very impressive return to the racing circuit was Suzi Rocky. After her last race in which she set a PB she suffered an awful hamstring tear which put her out for quite a while. However her recovery now seems complete as taking part in the Women’s Running Magazine 5K run in Exeter she came home in first place. Welcome back.